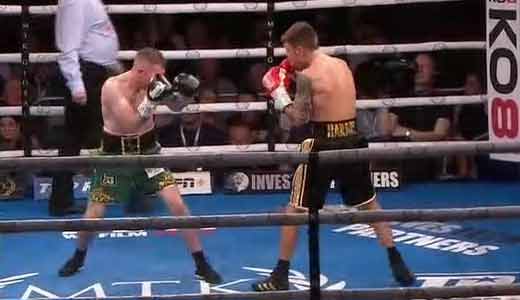 Review by AllTheBestFights.com: 2019-10-11, exciting fight from the first round: Jay Harris vs Paddy Barnes is one of the best boxing fights of the year 2019 and it gets four stars!

The undefeated Jay Harris entered this fight with a perfect boxing record of 16-0-0 (8 knockouts) and he is ranked as the No.29 flyweight in the world. In his last three fights he has won over Ross Murray, Brett Fidoe and Angel Moreno (Jay Harris vs Angel Moreno).
His opponent, the three times Olympian Paddy Barnes, has an official record of 6-2-0 (1 knockouts) and he entered as the No.60 in the same weight class. He lost two consecutive bouts between 2018 and 2019, against Cristofer Rosales (Cristofer Rosales vs Paddy Barnes) and Oscar Mojica, but then he has beat Joel Sanchez. Harris vs Barnes is valid for the vacant IBF Inter-Continental flyweight title. Watch the video and rate this fight!