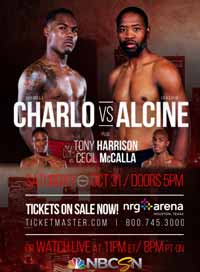 Review by AllTheBestFights.com: 2015-10-31, fight not so exciting between Tony Harrison and Cecil McCalla: it gets two stars.

Tony Harrison entered this fight with a pro boxing record of 21-1-0 (18 KOs=86%) and he is ranked as the No.35 middleweight in the world but he comes off his first loss, suffered against Willie Nelson (=Nelson vs Harrison).
His opponent, Cecil McCalla, has a record of 20-2-0 (7 knockouts) and he entered as the No.63 welterweight but he lost his last two bouts, against Chris van Heerden and Ishe Smith (=Smith vs McCalla). Harrison vs McCalla is on the undercard of Jermell Charlo vs Joachim Alcine. Watch the video and rate this fight!