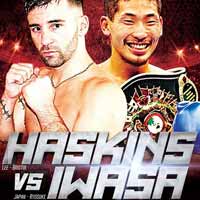 Review by AllTheBestFights.com: 2015-06-13, good fight between Ryosuke Iwasa and Lee Haskins: it gets three stars.

Ryosuke Iwasa entered this fight with a pro boxing record of 19-1-0 (12 knockouts) and he is ranked as the No.7 bantamweight in the world. He suffered his only loss when he faced #1 Shinsuke Yamanaka in 2011 (4-stars-fight, Yamanaka vs Iwasa), since then he has won 11 consecutive bouts beating Ricardo Roa in his last one.
His opponent, Lee Haskins, has an official record of 31-3-0 (13 knockouts) and he entered as the No.12 in the same weight class. His last defeat occurred in 2012, against Stephane Jamoye (=Haskins vs Jamoye), after this bout he has collected five victories winning the vacant EBU (European) Bw title in his last fight, against Omar Lamiri (=Haskins vs Lamiri). Iwasa vs Haskins is valid for the interim IBF World bantamweight title. Watch the video and rate this fight!