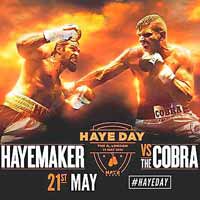 Review by AllTheBestFights.com: 2016-05-21, one sided fight between David Haye and Arnold Gjergjaj: it gets two stars.

The former Hw and Cw world champion David Haye entered this fight with a professional boxing record of 27-2-0 (25 KOs=93%) and he is ranked as the No.50 heavyweight in the world. ‘Hayemaker’ suffered his last loss when he faced Wladimir Klitschko in 2011 (=Klitschko vs Haye), since then he has fought just twice beating Dereck Chisora in 2012 (=Haye vs Chisora) and Mark de Mori in 2016 (=Haye vs de Mori).
His opponent, the undefeated Arnold Gjergjaj, has a perfect record of 29-0-0 (21 knockouts) and he entered as the No.23 in the same weight class. ‘The Cobra’ Gjergjaj fought three times in 2015 winning over Zoltan Csala, Denis Bakhtov and Marino Goles. Haye vs Gjergjaj is the main event of the evening. Watch the video and rate this fight!