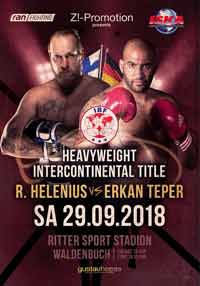 Review by AllTheBestFights.com: 2018-09-29, good finish between Erkan Teper and Robert Helenius: it gets three stars.

Erkan Teper entered this fight with a professional boxing record of 19-2-0 (12 knockouts) and he is ranked as the No.28 heavyweight in the world. He lost two consecutive bouts between 2016 and 2017, against Christian Hammer (Erkan Teper vs Christian Hammer) and Mariusz Wach (Erkan Teper vs Mariusz Wach), but then he has won over Zoltan Csala, Evgenios Lazaridis and Davit Gorgiladze.
His opponent, Robert Helenius, has an official record of 27-2-0 (16 knockouts) and he entered as the No.47 in the same weight class. He was defeated by Dillian Whyte last year (Dillian Whyte vs Robert Helenius) but then he has beat twice Yury Bykhautsou. Teper vs Helenius is valid for the vacant IBF Inter-Continental heavyweight title. Watch the video and rate this fight!