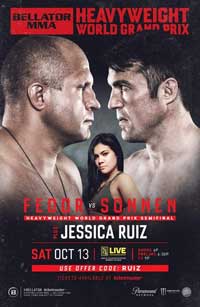 Review by AllTheBestFights.com: 2018-10-13, pretty good fight between Benson Henderson and Saad Awad: it gets three stars.

The black belt in tae-kwon-do, Bjj and former Ufc Lw champion Benson Henderson entered this fight with a professional record of 25-8-0 (56% finishing rate) and he is ranked as the No.11 lightweight in the world but he lost two out of his last three fights, against Michael Chandler (Chandler vs Henderson) and Patricky Freire (Benson Henderson vs Patricky Freire); after this bout he has beat Roger Huerta in 2018 (Benson Henderson vs Roger Huerta).
His opponent, Saad Awad, has a mma record of 23-9-0 (73% finishing rate) and he entered as the No.39 in the same weight class. He lost two consecutive bouts in 2016, against Derek Anderson (Derek Anderson vs Saad Awad) and Brennan Ward but then he has won four fights defeating JJ Ambrose and Ryan Couture in 2018 (Saad Awad vs Ryan Couture). Henderson vs Awad is on the undercard of Fedor Emelianenko vs Chael Sonnen – Bellator 208. Watch the video and rate this fight!