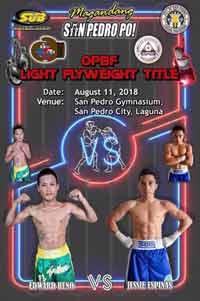 Review by AllTheBestFights.com: 2018-08-11, boring fight between Edward Heno and Jesse Espinas: it gets one star!

The undefeated Edward Heno entered this fight with a pro boxing record of 12-0-5 (5 knockouts) and he is ranked as the No.20 light flyweight in the world. He was stopped by Seita Ogido last year in May but then he beat him in the rematch in September and has defeated Merlito Sabillo in 2018.
His opponent, Jesse Espinas, has an official record of 19-2-0 (11 knockouts) and he entered as the No.16 in the same weight class. He lost to Christian Araneta in 2015, but since then he has won eight consecutive bouts beating Elias Joaquino and Lester Abutan in 2018. Heno vs Espinas is valid for the OPBF light flyweight title. Watch the video and rate this fight!