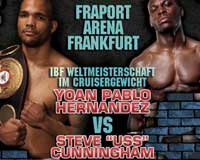 Review: 2012-02-04, with two knockdowns in the fourth round and some beautiful period (especially the early rounds), the second fight between Yoan Pablo Hernandez and Steve Cunningham gets our three stars (fight ended by unanimous decision). Yoan Pablo Hernandez (25-1-0) entered as the No.1 cruiserweight in the world while Steve Cunningham (24-3-0) entered as the No.3. Hernandez vs Cunningham 2 is valid for the IBF cruiserweight title; their first fight (October 1, 2011) ended by technical decision due to a headbutt and Hernandez was the winner. Watch the video!

Video: (this is a free embeddable video hosted on Dailymotion.com and it was not uploaded by AllTheBestFights, to report it please visit this link where the video is hosted)