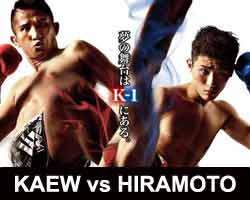 Review by AllTheBestFights.com: 2018-03-21, pretty good finish between Kaew Fairtex and Hiramoto Ren: it gets three stars.

The former Lumpinee, Wbc, Wpmf and K-1 world champion Kaew Fairtex (also known as Kaew Weerasakreck) entered this fight with a pro kickboxing record of 142-32-4 (45 knockouts) and he is ranked as the No.2 super lightweight in the world. He fought four times last year losing once, against Masaaki Noiri (Kaew Fairtex vs Masaaki Noiri 2), after this bout he defeated Liu Wei.
His opponent, Ren Hiramoto, has an official record of 9-4-0 (4 knockouts) and he entered as the No.8 in the same weight class. He fought five times in 2017 losing just the final of the K-1 World GP 2017 lightweight tournament, against Wei Rui; after this fight he beat Umar Paskhaev and Daizo Sasaki. Kaew vs Hiramoto, super lightweight fight of K-1 K Festa 1. Watch the video and rate this fight!