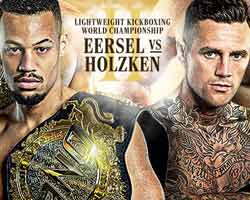 Review by AllTheBestFights.com: 2019-10-25, nice and tough fight between Regian Eersel and Nieky Holzken 2: it gets three stars.

The former Lion Fight super middleweight and current One Lw champion Regian Eersel entered this fight with a professional kickboxing record of 54-4-0 (26 knockouts) and he is ranked as the No.5 super middleweight in the world. He was defeated by Ma Yueheng in 2017 but since then he has collected 11 victories beating Anthony Njokuani and Nieky Holzken in 2019 (Nieky Holzken vs Regian Eersel I).
His opponent, the former Glory Ww champion Nieky Holzken, has an official record of 92-14-0 (57 knockouts) and he entered as the No.7 in the same weight class but he won just two out of his last six bouts, against Cosmo Alexandre (Nieky Holzken vs Cosmo Alexandre 2) and Mustapha Haida (Nieky Holzken vs Mustapha Haida), after this fight he has lost to Eersel in their first bout. Eersel vs Holzken 2 is valid for the ONE Kickboxing lightweight title (Eersel’s first defense); undercard of Zebaztian Kadestam vs Kiamrian Abbasov – ONE 101. Watch the video and rate this fight!

Event: ONE Championship: Dawn of Valor