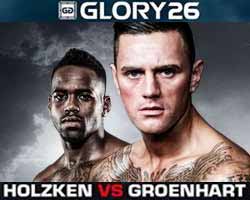 Nieky Holzken entered this fight with a professional kickboxing record of 87-11-0 (46 knockouts) and he is ranked as the No.1 super middleweight in the world. He suffered his last defeat in 2012 when he faced L’houcine Ouzgni, since then he has collected eight consecutive victories winning the Glory Ww tournament in 2013 beating Joseph Valtellini in the final (=Valtellini vs Holzken) and defeating Raymond Daniels in his last fight (=Holzken vs Daniels 2).
His opponent, Murthel Groenhart, has an official record of 58-19-3 (32 knockouts) and he entered as the No.4 in the same weight class. He lost his first two bouts in 2015, against Sitthichai Sitsongpeenong (=Groenhart vs Sitthichai) and Chad Sugden, but then he has won the Glory welterweight contender tournament beating Karim Ghajji in the final (=Ghajji vs Groenhart). In their first bout Holzken defeated Groenhart by decision (October 16, 2010); this second fight is valid for the Glory welterweight title (held by Holzken); undercard of Rico Verhoeven vs Benjamin Adegbuyi 2 – Glory 26. Watch the video and rate this fight!