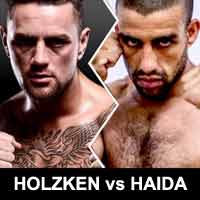 Review by AllTheBestFights.com: 2019-02-22, fight not so exciting between Nieky Holzken and Mustapha Haida: it gets two stars.

The former Glory Ww champion Nieky Holzken entered this fight with a professional kickboxing record of 91-14-0 (57 knockouts) and he is ranked as the No.6 super middleweight in the world. He lost three consecutive bouts between 2016 and 2017, twice with Cedric Doumbe (Holzken vs Doumbe I and Doumbe vs Holzken II) and with Alim Nabiev (Nieky Holzken vs Alim Nabiev) but he came back to win in 2018 against Cosmo Alexandre (Nieky Holzken vs Cosmo Alexandre 2).
His opponent, the former Iska world champion Mustapha Haida, has an official record of 39-7-3 (21 knockouts); he was defeated by Miao Chenlei in 2017 but then he has won over Enriko Kehl and Daniel Dawson. Holzken vs Haida is on the undercard of Stamp Fairtex vs Janet Todd – ONE FC 91. Watch the video and rate this fight!

Event: ONE Championship 91: Call to Greatness