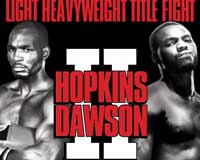 Review: 2012-04-28, the second fight between Bernard Hopkins and Chad Dawson has not been very spectacular: two stars (fight ended by majority decision). Bernard Hopkins (52-5-2) entered as the No.1 light heavyweight in the world while Chad Dawson (30-1-0) entered as the No.3. Dawson vs Hopkins 2 is valid for the WBC light heavyweight title; their first fight ended by no contest in the second round. Watch the video!