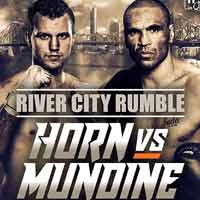 Review by AllTheBestFights.com: 2018-11-30, pretty good fight between Jeff Horn and Anthony Mundine: it gets three stars.

The former Olympian and former Wbo Ww champion Jeff Horn entered this fight with a pro boxing record of 18-1-1 (12 knockouts) and he is ranked as the No.5 welterweight in the world but he comes off his first loss, suffered against current #1 Terence Crawford (Jeff Horn vs Terence Crawford); before this bout, in 2017, Jeff ‘The Hornet’ had won over Manny Pacquiao (Pacquiao vs Horn) and Gary Corcoran (Jeff Horn vs Gary Corcoran).
His opponent, the 43-year-old former world champion in two different weight classes Anthony Mundine, has a record of 48-8-0 (28 knockouts) and he entered as the No.21 middleweight but he lost two out of his last three fights, against Charles Hatley (Anthony Mundine vs Charles Hatley) and Danny Green (Anthony Mundine vs Danny Green 2); in his last bout he beat Tommy Browne (Anthony Mundine vs Tommy Browne). Horn vs Mundine is valid for the vacant WBA Oceania and WBO Oriental middleweight titles. Watch the video and rate this fight!