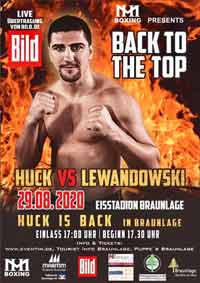 Review by AllTheBestFights.com: 2020-08-29, disappointing fight between Marco Huck and Dennis Lewandowski: it gets two stars.
The former Wbo and Ibo Cw champion Marco Huck entered this fight with a professional record of 41-5-1 (28 knockouts) and he is ranked as the No.28 heavyweight in the world. He lost two consecutive bouts in 2017, against Mairis Briedis (Huck vs Briedis) and Oleksandr Usyk (Oleksandr Usyk vs Marco Huck), but then he came back to win with Yakup Saglam in 2018 (Marco Huck vs Yakup Saglam); after this bout he also faced Nick Guivas in 2019 but it ended in a no-contest (Marco Huck vs Nick Guivas).
His opponent, Dennis Lewandowski, has a boxing record of 13-4-0 (6 knockouts) and he entered as the No.232 in the same weight class but he comes off three consecutive losses, against Boris Estenfelder, Cyril Leonet and Fabio Wardley. Lewandowski vs Huck is the main event of the evening. Watch the video and rate this fight!

(Free embeddable video hosted on Vimeo and not uploaded by AllTheBestFights)