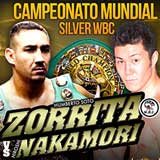 Review: 2013-06-08, good pace and some good exchanges between Humberto Soto and Hiroshi Nakamori: it gets three stars. Humberto ‘La Zorrita’ Soto ranked as the No.9 light welterweight in the world, entered the fight with a record of 60-8-2 (34 knockouts) while Hiroshi Nakamori had a record of 33-5-1 (20 knockouts). Soto vs Nakamori is valid for the WBC International Silver light welterweight title. Watch the video!

Result: Click here to show the fight’s result
Humberto Soto vs Hiroshi Nakamori (TKO at 2:29, round 9)