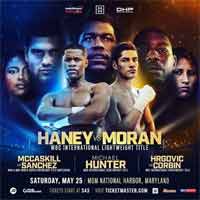 Review by AllTheBestFights.com: 2019-05-25, one sided fight between Michael Hunter and Fabio Maldonado: it gets two stars.

The former Olympian Michael Hunter entered this fight with a boxing record of 16-1-0 (11 knockouts) and he is ranked as the No.37 heavyweight in the world. He suffered his only loss when he faced Oleksandr Usyk in 2017 (Oleksandr Usyk vs Michael Hunter), after this bout he has won over Terrell Jamal Woods, Iago Kiladze, Martin Bakole Ilunga and Alexander Ustinov (Michael Hunter vs Alexander Ustinov).
His opponent, the former Ufc and mma fighter Fabio Maldonado, has an official record of 26-2-0 (25 KOs=96%) and he entered as the No.351 in the same weight class but he comes off two consecutive losses, against Oleksandr Teslenko and Oscar Rivas. Hunter vs Maldonado is valid for the WBA International heavyweight title; undercard of Devin Haney vs Antonio Moran. Watch the video and rate this fight!