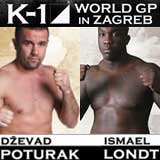 Review: 2013-03-15, good second round between Ismael Londt and Dzevad Poturak but it is not enough to get three stars. Ismael Londt (33-4-1) entered as the No.13 heavyweight in the world while Dzevad Poturak (49-21-1) entered as the No.4. Londt had to face Badr Hari in the semifinal but the Moroccan has broken his foot during the quarterfinal, so he was replaced by Poturak who won the reserve fight against Sergei Lascenko; Londt vs Poturak is the semifinal of “K-1 World Grand Prix 2012 Final”. Watch the video!