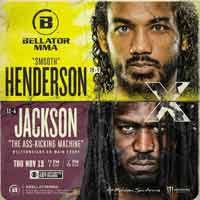 Review by AllTheBestFights.com: 2020-11-19, pretty good fight between Benson Henderson and Jason Jackson: it gets three stars.
The black belt in tae-kwon-do, Bjj and former Ufc Lw champ Benson Henderson entered this fight with a pro mma record of 28-9-0 (50% finishing rate) and he is ranked as the No.19 lightweight in the world but he comes off the loss against Michael Chandler (Michael Chandler vs Benson Henderson 2); before this bout, in 2019, he had beat Adam Piccolotti (Benson Henderson vs Adam Piccolotti) and Myles Jury (Benson Henderson vs Myles Jury).
His opponent, Jason Jackson, has a record of 12-4-0 (58% finishing rate) and he entered as the No.71 welterweight. He lost to Ed Ruth last year but then he has won over Kiichi Kunimoto and Jordan Mein. Jackson vs Henderson is on the undercard of AJ McKee vs Darrion Caldwell – Bellator 253. Watch the video and rate this fight!