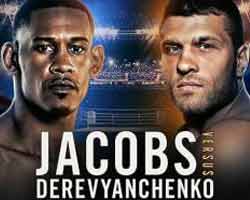 Review by AllTheBestFights.com: 2018-10-27, good fight between Daniel Jacobs and Sergiy Derevyanchenko: it gets three stars.

The former Wba Mw champion Daniel Jacobs entered this fight with a professional boxing record of 34-2-0 (29 KOs=85%) and he is ranked as the No.3 middleweight in the world (currently the #1 in this division is Saul ‘Canelo’ Alvarez). He lost to Gennady Golovkin last year (Golovkin vs Jacobs) but then he has beat Luis Arias (Daniel Jacobs vs Luis Arias) and Maciej Sulecki (Daniel Jacobs vs Maciej Sulecki).
His opponent, the undefeated former Olympian Sergiy Derevyanchenko, has a perfect record of 12-0-0 (10 KOs=83%) and he entered as the No.9 in the same weight class. In his last three bouts he has won over Kemahl Russell (Derevyanchenko vs Russell), Tureano Johnson (Sergiy Derevyanchenko vs Tureano Johnson) and Dashon Johnson. Jacobs vs Derevyanchenko is valid for the vacant IBF World middleweight title. Watch the video and rate this fight!

Jacobs vs Derevyanchenko starts at 1:14:00