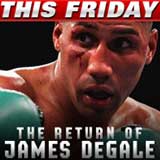 Review: 2013-05-17, fight not particularly exciting with one knockdown: James DeGale vs Sebastien Demers gets two stars. James DeGale ranked as the No.11 super middleweight in the world, entered the fight with a record of 14-1-0 while Sebastien Demers had a record of 31-5-0 (Demers is not ranked as he hasn’t fought since November 5, 2011 when he was defeated by Allan Green). DeGale vs Demers is on the undercard of Ghislain Maduma vs Saul Carreon. Watch the video!