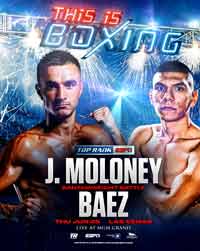 Review by AllTheBestFights.com: 2020-06-25, good fight between Jason Moloney and Leonardo Baez: it gets three stars.
Jason Moloney entered this fight with a pro boxing record of 20-1-0 (17 KOs=85%) and he is ranked as the No.8 bantamweight in the world (currently the #1 in this division is Naoya Inoue). He suffered his only loss when he faced Emmanuel Rodriguez in 2018 (Emmanuel Rodriguez vs Jason Moloney), since then he has won over Cris Paulino, Goodluck Mrema and Dixon Flores.
His opponent, Leonardo Baez, has a record of 18-2-0 (9 knockouts) and he entered as the No.48 super bantamweight. He was defeated by Alfredo Mejia Vargas in 2018 but then he has won six consecutive bouts beating Moises Flores in 2020. Moloney vs Baez is the main event of the evening. Watch the video and rate this fight!