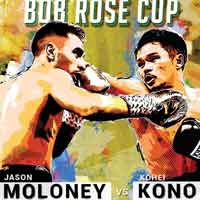 Review by AllTheBestFights.com: 2018-05-19, good action between Jason Moloney and Kohei Kono: it gets three stars.

The undefeated Jason Moloney entered this fight with a perfect boxing record of 16-0-0 (13 KOs=81%) and he is ranked as the No.15 bantamweight in the world. In his last three fights he has won over Lolito Sonsona, Julias Kisarawe and Immanuel Naidjala.
His opponent, the former Wba super-Fw champion Kohei Kono, has an official record of 33-11-1 (14 knockouts) and he entered as the No.15 super flyweight but he lost three out of his last four bouts, the last one with Rex Tso (Rex Tso vs Kohei Kono); before this fight he had beat Yuranan Dokrathok. Moloney vs Kono is valid for the WBA Oceania bantamweight title. Watch the video and rate this fight!