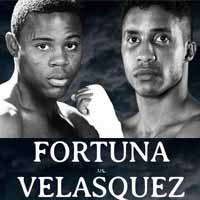 Review by AllTheBestFights.com: 2015-09-29, pretty good fight between Javier Fortuna and Carlos Velasquez: it gets three stars.

The undefeated Javier Fortuna entered this fight with a professional boxing record of 28-0-1 (20 knockouts) and he is ranked as the No.2 super featherweight in the world (currently the #1 in this division is Takashi Uchiyama). The only man who stopped him in a draw was Luis Franco in 2013 (=Fortuna vs Franco), since then he has won six consecutive bouts winning the vacant WBA super-Fw belt in his last fight, against Bryan Vasquez (=Vasquez vs Fortuna).
His opponent, Carlos Ivan Velasquez, has an official record of 19-1-0 (12 knockouts) and his only loss occurred in 2013 when he faced Rico Ramos; after this fight he has collected four victories. Fortuna vs Velasquez is valid for the WBA World super featherweight title. Watch the video and rate this fight!

Report broken video
« Best fights of the week 39, year 2015
2015 K-1 MUAY THAI fight – Catalin Morosanu vs Tomasz Czerwinski – full fight Video »
HELP US!!! Since the CORONAVIRUS pandemic started, AllTheBestFights.com has struggled to survive! If you have enjoyed this website for the past 10 years, today we ask you for a little help: