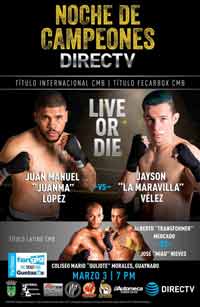 Review by AllTheBestFights.com: 2018-03-03, pretty good fight between Juanma Lopez and Jayson Velez: it gets three stars.

The former world champion in two different weight classes Juan Manuel Lopez entered this fight with a professional record of 35-5-0 (32 KOs=91%) but he is not ranked as he hasn’t fought since October 29, 2016 when he defeated Wilfredo Vazquez Jr (Juan Manuel Lopez vs Wilfredo Vazquez Jr). Before this bout he had suffered two consecutive losses in 2014, with Francisco Vargas (Juan Manuel Lopez vs Francisco Vargas) and Jesus Andres Cuellar (Lopez vs Cuellar).
His opponent, Jayson Velez, has a boxing record of 25-4-1 (17 knockouts) and he entered as the No.68 super featherweight in the world. He lost four consecutive fights between 2015 and 2016, but he came back to win in 2017 beating Alberto Mercado and Giovanni Caro. Lopez vs Velez is the main event of the evening. Watch the video and rate this fight!

(Free embeddable video hosted on Youtube and not uploaded by AllTheBestFights)
https://www.youtube.com/watch?v=SCWVma2QmvE