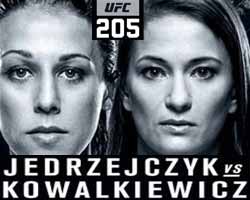 Review by AllTheBestFights.com: 2016-11-12, disappointing fight between Joanna Jedrzejczyk and Karolina Kowalkiewicz: it gets two stars.

Both undefeated, the current Ufc and former Wkn kickboxing champion Joanna Jedrzejczyk entered this fight with a perfect record of 12-0-0 (42% finishing rate) and she is ranked as the No.1 women’s strawweight in the world while her opponent, the former Ksw Flw champion Karolina Kowalkiewicz, has an official mma record of 10-0-0 (30% finishing rate) and she entered as the No.6 in the same weight class. Jedrzejczyk has beat Claudia Gadelha in 2016 (=Jedrzejczyk vs Gadelha 2) while Kowalkiewicz has won over Heather Jo Clark (=Kowalkiewicz vs Clark) and Rose Namajunas (=Namajunas vs Kowalkiewicz). They faced each other in 2012 in an amateur bout and the winner was Jedrzejczyk via submission. Jedrzejczyk vs Kowalkiewicz is valid for the Ufc women’s strawweight title (Jedrzejczyk’s fourth defense); undercard of Eddie Alvarez vs Conor McGregor – UFC 205. Watch the video and rate this fight!