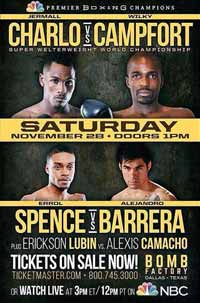 Review by AllTheBestFights.com: 2015-11-28, fight not particularly good between Jermall Charlo and Wilky Campfort: it gets two stars.

The undefeated Jermall Charlo entered this fight with a perfect record of 22-0-0 (17 KOs=77%) and he is ranked as the No.5 super welterweight in the world (currently the #1 in this division is Saul ‘Canelo’ Alvarez). He has fought twice in 2015 beating Michael Finney and Cornelius Bundrage (=Bundrage vs Charlo).
His opponent, Wilky Campfort, has a record of 21-1-0 (12 knockouts) and he entered as the No.67 in the same weight class. He suffered his only loss in 2009 at his second professional fight, against Manny Woods, since then he has won 20 consecutive bouts. Charlo vs Campfort is valid for the IBF World super welterweight title (Charlo’s first defense). Watch the video and rate this fight!