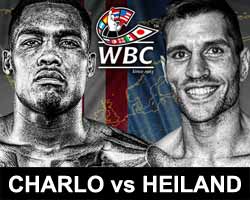 The undefeated former Ibf super-Ww champion Jermall Charlo entered this fight with a perfect boxing record of 25-0-0 (19 KOs=76%) and he is ranked as the No.2 super welterweight in the world (currently the #1 in this division is Erislandy Lara). He fought twice last year winning over Austin Trout (=Charlo vs Trout) and Julian Williams (=Charlo vs Williams).
His opponent, Jorge Sebastian Heiland, has a record of 29-4-2 (16 knockouts) and he entered as the No.10 in the same weight class. He suffered his last loss when he faced Mateo Damian Veron in 2013, since then he has collected eight consecutive victories beating twice Veron. Jermall Charlo vs Jorge Sebastian Heiland, WBC middleweight final eliminator, is on the undercard of Mikey Garcia vs Adrien Broner. Watch the video and rate this fight!