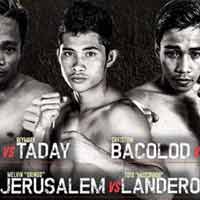 Review by AllTheBestFights.com: 2018-11-10, some good exchanges between Melvin Jerusalem and Toto Landero but it is not enough to get three stars: it gets two.

Melvin Jerusalem entered this fight with a pro boxing record of 13-2-0 (8 knockouts) and he is ranked as the No.9 minimumweight in the world. He lost two consecutive bouts last year, against current #1 Wanheng Menayothin (Wanheng Menayothin vs Melvin Jerusalem ) and Joey Canoy, but then he has won over Jestoni Racoma and Philip Luis Cuerdo.
His opponent, Toto Landero, has a record of 10-3-2 (2 knockouts) and he entered as the No.14 in the same weight class but he comes off two defeats, against Knockout CP Freshmart (Knockout CP Freshmart vs Toto Landero) and Simphiwe Khonco (Simphiwe Khonco vs Toto Landero). Jerusalem vs Landero is the main event of the evening – IDOL 4 Boxing. Watch the video and rate this fight!