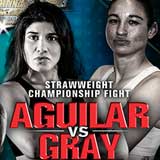 Review: 2014-01-18, pretty good finish but it is not enough to get three stars: Jessica Aguilar vs Alida Gray gets two. The purple belt in Brazilian jiu-jitsu Jessica Aguilar entered this fight with a record of 16-4-0 (57% finishing rate) and he is ranked as the No.1 women’s strawweight in the world, she suffered her last loss to Zoila Gurgel in 2010 (semifinal of the Bellator women’s 115 lbs tournament – 3 season). Alida Gray has a record of 4-0-0 (100% finishing rate) and he entered as the No.8 in the same weight class. Aguilar vs Gray is valid for the inaugural WSOF women’s strawweight title; undercard of Justin Gaethje vs Richard Patishnock – WSOF 8. Watch the video and rate this fight!