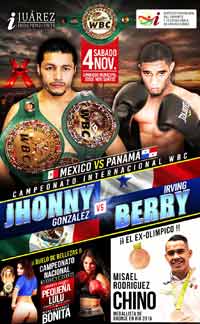 Review by AllTheBestFights.com: 2017-11-04, pretty good fight between Jhonny Gonzalez and Irving Berry: it gets three stars.

The former world champion in two different weight classes Jhonny Gonzalez entered this fight with a record of 64-10-0 (54 KOs=84%) and he is ranked as the No.13 super featherweight in the world. He suffered his last loss when he faced Jonathan Oquendo in 2015 (=Gonzalez vs Oquendo), since then he has won six consecutive bouts beating Francisco Contreras (=Gonzalez vs Contreras) and Jessie Cris Rosales in 2017 (=Gonzalez vs Rosales).
His opponent, Irving Berry, has a boxing record of 23-6-2 (10 knockouts) but he lost three out of his last four fights, the last one with Tomas Rojas in 2014 (=Rojas vs Berry); he came back to win in 2017 against Eliecer Lanzas. Gonzalez vs Berry is valid for the WBC Latino super featherweight title. Watch the video and rate this fight!