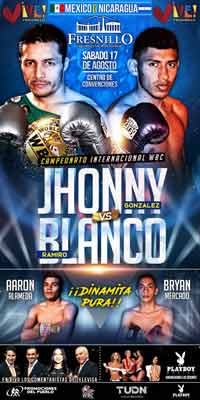 Review by AllTheBestFights.com: 2019-08-17, fight not particularly good between Jhonny Gonzalez and Ramiro Blanco: it gets two stars.

The former world champion in two different weight classes Jhonny Gonzalez entered this fight with a pro boxing record of 67-11-0 (55 KOs=82%) and he is ranked as the No.23 super featherweight in the world. He lost to Tomas Rojas last year (Jhonny Gonzalez vs Tomas Rojas) but he came back to win against Rafael Hernandez in 2019 (Jhonny Gonzalez vs Rafael Hernandez).
His opponent, Ramiro Blanco, has a record of 18-5-3 (10 knockouts) and he entered as the No.121 in the same weight class but he won just one out of his last four fights, against Moises Castro in 2018; after this bout he has been defeated by Andres Gutierrez and Miguel Roman (Miguel Roman vs Ramiro Blanco). Gonzalez vs Blanco is valid for the WBC FECARBOX Silver super featherweight title. Watch the video and rate this fight!