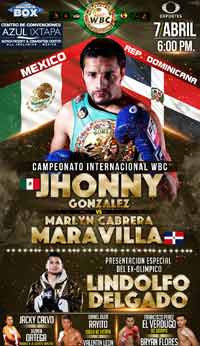 Review by AllTheBestFights.com: 2018-04-07, fight not so exciting between Jhonny Gonzalez and Marlyn Cabrera: it gets two stars.

The former world champion in two different weight classes Jhonny Gonzalez entered this fight with a pro record of 65-10-0 (54 KOs=83%) and he is ranked as the No.14 super featherweight in the world. He suffered his last loss when he faced Jonathan Oquendo in 2015 (Gonzalez vs Oquendo), since then he has won seven consecutive bouts beating Francisco Contreras (Gonzalez vs Contreras), Jessie Cris Rosales (Gonzalez vs Rosales) and Irving Berry in 2017 (Jhonny Gonzalez vs Irving Berry).
His opponent, Marlyn Cabrera, has an official boxing record of 24-1-0 (11 knockouts) and he suffered his only loss when he faced Javier Fortuna in 2016; after this bout he fought twice in 2017 beating Richard Carrillo and Anderson Rangel. Gonzalez vs Cabrera is valid for the WBC Latino super featherweight title. Watch the video and rate this fight!