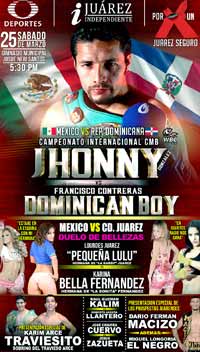 Review by AllTheBestFights.com: 2017-03-25, pretty good finish between Jhonny Gonzalez and Francisco Contreras but it is not enough to get three stars: it gets two.

The former world champion in two different weight classes Jhonny Gonzalez entered this fight with a professional record of 62-10-0 (52 KOs=84%) and he is ranked as the No.16 super featherweight in the world while his opponent, Francisco Contreras, has a boxing record of 30-5-0 (23 KOs=77%). Gonzalez suffered his last loss when he faced Jonathan Oquendo in 2015 (=Gonzalez vs Oquendo) but then he has won four bouts beating Hirotsugu Yamamoto in his last one (=Gonzalez vs Yamamoto) while Contreras lost to Andrey Klimov in 2014 and then he has collected eight consecutive wins. Jhonny Gonzalez vs Francisco Contreras is valid for the interim WBC Latino super featherweight title. Watch the video and rate this fight!