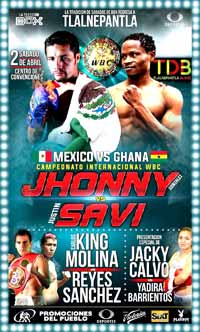 Review by AllTheBestFights.com: 2016-04-02, one sided fight between Jhonny Gonzalez and Justin Savi: it gets two stars.

The former world champion in two different weight classes Jhonny Gonzalez entered this fight with a boxing record of 59-10-0 (49 KOs=83%) and he is ranked as the No.22 super featherweight in the world while his opponent, Justin Savi, has a record of 28-4-2 (18 knockouts). Gonzalez lost to Jonathan Oquendo last year (=Gonzalez vs Oquendo) but then he beat Hurricane Futa (=Gonzalez vs Futa). Gonzalez vs Savi is valid for the WBC International Silver super featherweight title. Watch the video and rate this fight!