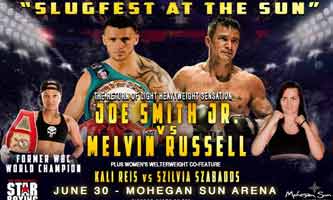 Review by AllTheBestFights.com: 2018-06-30, fight not particularly good between Joe Smith Jr and Melvin Russell: it gets two stars.

Joe Smith Jr entered this fight with a pro record of 23-2-0 (19 KOs=83%) and he is ranked as the No.6 light heavyweight in the world (currently the #1 in this division is Adonis Stevenson) but he comes off the loss with Sullivan Barrera (Joe Smith Jr vs Sullivan Barrera). Before this bout, in 2016, he had beat Fabiano Pena, Andrzej Fonfara (Fonfara vs Smith) and Bernard Hopkins (Hopkins vs Smith).
His opponent, Melvin Russell, has an official boxing record of 11-4-2 (7 knockouts) and he entered as the No.301 in the same weight class. He won just one out of his last four fights, against Tahlik Taylor in 2017, after this bout, in 2018, he was defeated by Josh Fisher. Smith vs Russell is the main event of the evening. Watch the video and rate this fight!