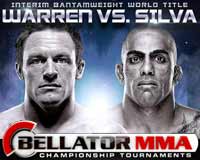 Review: 2014-05-02, pretty good fight between Joe Warren and Rafael Silva: it gets three stars. Joe Warren entered this fight with a professional mma record of 10-3-0 (40% finishing rate, with only one victory via submission) and he is ranked as the No.10 bantamweight in the world, he won the Bellator Fw title in 2010 against Joe Soto but then he lost the belt in 2012 when he faced Pat Curran (=Curran vs Warren), after that bout he has fought and won three times winning the Bw tournament final (season 9) against Travis Marx in his last fight (=Warren vs Marx).
His opponent, Rafael Silva, has an official record of 21-3-0 (81% finishing rate) and he entered as the No.21 in the same weight class, he suffered his last defeat in 2011 when he faced Diego D’Avila, since then he has collected 13 consecutive victories winning the Bw tournament final (summer series) against Anthony Leone (=Leone vs Silva). Warren vs Silva, main event of Bellator 118, is valid for the interim Bellator bantamweight title only for Warren since Silva missed weight by 2 pounds. Watch the video and rate this fight!