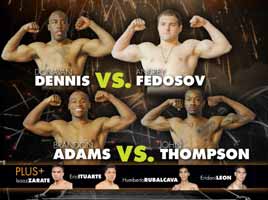 Review by AllTheBestFights.com: 2015-05-22, nice exchanges between Brandon Adams and John Thompson: it gets three stars.

Brandon Adams entered this fight with a boxing record of 17-1-0 (12 knockouts) and he is ranked as the No.27 super welterweight in the world. He suffered his only defeat at the end of 2014 when he faced Willie Monroe Jr (final of ESPN’s 2014 Boxcino Mw tournament, Adams vs Monroe Jr) but after losing he has won three consecutive bouts beating Vito Gasparyan in his last fight.
His opponent, John Thompson, has an official record of 16-1-0 (5 knockouts) and he entered as the No.84 in the same weight class. He fought just once last year losing to Frank Galarza (=Thompson vs Galarza) but he came back to win in 2015 beating Ricardo Pinell and Stanyslav Skorokhod (=Skorokhod vs Thompson). Adams vs Thompson is the final of ESPN’s 2015 Boxcino super-Ww tournament and it is valid for the interim WBA-NABA and vacant WBO Inter-Continental super welterweight titles; undercard of Andrey Fedosov vs Donovan Dennis. Watch the video and rate this fight!