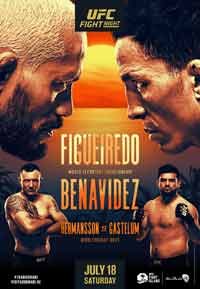 Review by AllTheBestFights.com: 2020-07-19, fight not particularly good between Montel Jackson and Brett Johns: it gets two stars.
Montel Jackson entered this fight with a professional mma record of 9-1-0 (67% finishing rate) and he is ranked as the No.19 bantamweight in the world. He suffered his only loss when he faced Ricky Simon in 2018, since then he has won over Brian Kelleher, Andre Soukhamthath and Felipe Colares.
His opponent, the black belt in judo and Brazilian jiu-jitsu Brett Johns, has an official record of 16-2-0 (50% finishing rate) and he entered as the No.26 in the same weight class. He lost two consecutive fights in 2018, against Aljamain Sterling (Brett Johns vs Aljamain Sterling) and Pedro Munhoz (Pedro Munhoz vs Brett Johns) but he comes back to win with Tony Gravely in 2020. Jackson vs Johns is on the undercard of Deiveson Figueiredo vs Joseph Benavidez 2 – UFC Fight Night 172 (also known as UFC on ESPN+ 30). Watch the video and rate this fight!