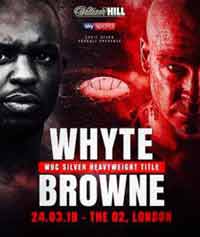 Review by AllTheBestFights.com: 2018-03-24, some good exchanges between Frank Buglioni and Callum Johnson but it is not enough to get three stars: it gets two.

Frank Buglioni entered this fight with a professional boxing record of 21-2-1 (15 knockouts) and he is ranked as the No.23 light heavyweight in the world. He lost to Fedor Chudinov in 2015 (Fedor Chudinov vs Frank Buglioni) but then he has won four bouts beating Ricky Summers and Craig Richards in 2017.
His opponent, the undefeated Callum Johnson, has a perfect record of 16-0-0 (11 knockouts) but he is not ranked as he hasn’t fought since September 24, 2016 when he defeated Willbeforce Shihepo. Buglioni vs Johnson is valid for the BBBofC British light heavyweight title; undercard of Dillian Whyte vs Lucas Browne. Watch the video and rate this fight!