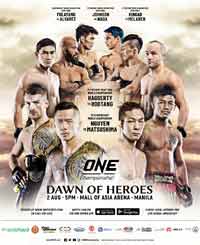 Review by AllTheBestFights.com: 2019-08-02, disappointing fight between Demetrious Johnson and Tatsumitsu Wada: it gets two stars.

The former Ufc Flw champion Demetrious Johnson entered this fight with a pro mma record of 28-3-1 (61% finishing rate) and he is ranked as the No.11 bantamweight in the world. He lost the rematch against current #1 Henry Cejudo last year (via split decision, Demetrious Johnson vs Henry Cejudo 2) but he came back to win with Yuya Wakamatsu in 2019 (Demetrious Johnson vs Yuya Wakamatsu).
His opponent, Tatsumitsu Wada, has a record of 21-10-2 (48% finishing rate) and he entered as the No.123 in the same weight class. He has already fought twice in 2019 losing to Danny Kingad and beating Gustavo Eddy Balart. Johnson vs Wada is the semi-final of the One Fc flyweight world grand prix tournament; undercard of Martin Nguyen vs Koyomi Matsushima – ONE FC 100. Watch the video and rate this fight!

Event: ONE Championship: Dawn of Heroes