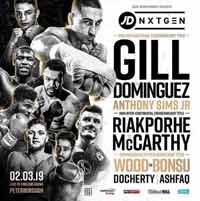 Review by AllTheBestFights.com: 2019-03-02, one sided fight between Jordan Gill and Emmanuel Dominguez: it gets two stars.

The undefeated Jordan Gill entered this fight with a perfect boxing record of 22-0-0 (6 knockouts) and he is ranked as the No.27 featherweight in the world. He fought four times in 2018 winning over Jason Cunningham, Carl McDonald, David Berna and Ryan Doyle.
His opponent, Emmanuel Dominguez, has an official record of 24-7-2 (16 knockouts) and he entered as the No.77 in the same weight class. He lost once last year, against Toka Kahn Clary, but then he has beat Miguel Angel Gonzalez and Carlos Alberto Banuelos. Gill vs Dominguez is valid for the vacant WBA International featherweight title. Watch the video and rate this fight!