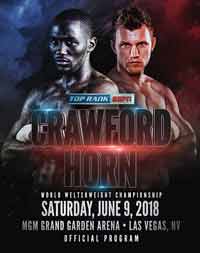 Review by AllTheBestFights.com: 2018-06-09, one sided fight between Jose Benavidez and Frank Rojas: it gets two stars.

Both undefeated, the 2009 USA National Golden Gloves light-Ww champion Jose Benavidez entered this fight with a perfect record of 26-0-0 (17 knockouts) and he is ranked as the No.26 welterweight in the world while his opponent, Frank Rojas, has an official boxing record of 22-0-0 (21 KOs=95%). In their last three fights Benavidez has defeated Sidney Siqueira (Jose Benavidez vs Sidney Siqueira), Francisco Santana (Jose Benavidez vs Francisco Santana) and Matthew Strode while Rojas has beat Jesus Bermudez, Jorge Oliveros and Luis Gonzalez. Benavidez vs Rojas is valid as Wba World title eliminator; undercard of Jeff Horn vs Terence Crawford. Watch the video and rate this fight!