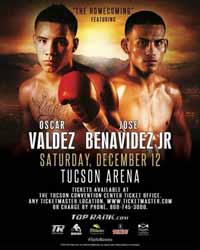 Review by AllTheBestFights.com: 2015-12-12, some good exchanges between Jose Benavidez and Sidney Siqueira but it is not enough to get three stars: it gets two.

The undefeated Jose Benavidez entered this fight with a perfect boxing record of 23-0-0 (16 knockouts) and he is ranked as the No.9 super lightweight in the world (currently the #1 in this division is Terence Crawford). He has fought once in 2015 winning over Jorge Paez Jr (=Benavidez vs Paez Jr).
His opponent, Sidney Siqueira, has a record of 26-10-1 (17 knockouts) but he comes off two consecutive losses suffered both against Vitor Jones Freitas. Benavidez vs Siqueira is on the undercard of Oscar Valdez vs Ernie Sanchez. Watch the video and rate this fight!