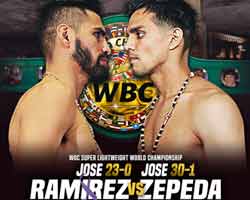 The former Olympian and current Wbc light-Ww champion Jose Carlos Ramirez entered this fight with a perfect boxing record of 23-0-0 (16 knockouts) and he is ranked as the No.6 super lightweight in the world (currently the #1 in this division is Regis Prograis). In his last three bouts he has won over Mike Reed (Jose Carlos Ramirez vs Mike Reed), Amir Imam (Jose Carlos Ramirez vs Amir Imam) and Antonio Orozco (4,stars fight, Jose Carlos Ramirez vs Antonio Orozco).
His opponent, Jose Zepeda, has an official record of 30-1-0 (25 KOs=83%) and he entered as the No.10 in the same weight class. He suffered his only loss when he faced Terry Flanagan in 2015 (Terry Flanagan vs Jose Zepeda), since then he has collected one no-contest and seven victories defeating Carlos Diaz Ramirez (Jose Zepeda vs Carlos Diaz Ramirez) and Domicio Rondon in 2018. Ramirez vs Zepeda is valid for the WBC World super lightweight title (Ramirez’s second defense). Watch the video and rate this fight!