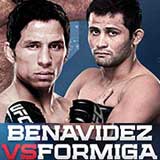 Review: 2013-09-04, pretty good finish between Joseph Benavidez and Jussier Formiga but it is not enough to get three stars. Joseph Benavidez (18-3-0, 72% finishing rate) entered as the No.2 flyweight in the world while Jussier ‘Formiga’ da Silva (15-2-0, 47% finishing rate – curiously he has never won by ko/tko) entered as the No.10 (currently the #1 in this weight division is Demetrious Johnson). Benavidez vs Formiga da Silva is on the undercard of Glover Teixeira vs Ryan Bader – UFC Fight Night 28; they also faced each other a second time on June 29, 2019 (Jussier Formiga da Silva vs Joseph Benavidez 2). Watch the video!