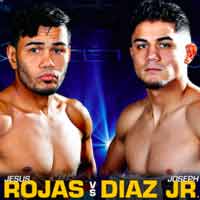 The former Olympian Joseph Diaz entered this fight with a boxing record of 26-1-0 (14 knockouts) and he is ranked as the No.9 featherweight in the world (currently the #1 in this division is Leo Santa Cruz) but he comes off his first loss, suffered against Gary Russell Jr in May (Gary Russell Jr vs Joseph Diaz). Before this bout, Jo Jo Diaz had beat Victor Terrazas in February (Joseph Diaz vs Victor Terrazas) and Rafael Rivera in September 2017 (Joseph Diaz vs Rafael Rivera).
His opponent, the interim Wba Fw champion Jesus M Rojas, has an official record of 26-1-2 (19 knockouts) and he entered as the No.14 in the same weight class. He lost to Jose Angel Beranza in 2008 but since then he has collected 13 victories, two draws and one no-contest beating Abraham Lopez and Claudio Marrero in 2017 (Claudio Marrero vs Jesus M Rojas). Jo Jo Diaz vs Rojas is valid for the WBA World featherweight title. Watch the video and rate this fight!

Where: The Avalon, Hollywood, California, USA

Rojas’ next fight: Jesus M Rojas vs Can Xu

Report broken video
« 2018 K-1 MUAY THAI fight – Artem Vakhitov vs Danyo Ilunga 2 – full fight Video Glory 56
Best fights of the week 32, year 2018 »
HELP US!!! Since the CORONAVIRUS pandemic started, AllTheBestFights.com has struggled to survive! If you have enjoyed this website for the past 10 years, today we ask you for a little help: