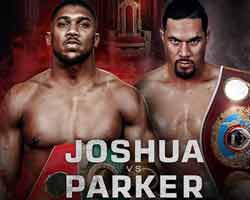 Review by AllTheBestFights.com: 2018-03-31, disappointing fight between Anthony Joshua and Joseph Parker: it gets two stars.

Both undefeated, the 2012 Olympic super heavyweight gold medalist and current IBF, IBO and WBA world champion Anthony Joshua entered this fight with a perfect boxing record of 20-0-0 (20 KOs=100%) and he is ranked as the No.1 heavyweight in the world while his opponent, the Wbo Hw champ Joseph Parker, has an official record of 24-0-0 (18 KOs=75%) and he entered as the No.7 in the same weight class. Both boxers fought twice last year: AJ defeated Wladimir Klitschko (Joshua vs Klitschko) and Carlos Takam (Anthony Joshua vs Carlos Takam) while Parker beat Razvan Cojanu (Joseph Parker vs Razvan Cojanu) and Hughie Fury (Joseph Parker vs Hughie Fury). Parker had also faced Takam, in 2016, winning by unanimous decision (Joseph Parker vs Carlos Takam) while Joshua won via tko in the tenth round. Joshua vs Parker is valid for the IBF, IBO, WBA and WBO World heavyweight titles. Watch the video and rate this fight!