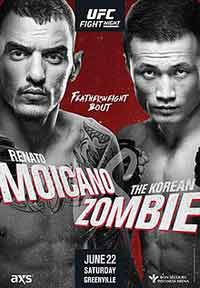 Review by AllTheBestFights.com: 2019-06-22, fight not so exciting between Renato Moicano Carneiro and Chan Sung Jung: it gets two stars.

The black belt in Brazilian jiu-jitsu Renato Moicano Carneiro entered this fight with a professional record of 13-2-1 (46% submission victory rate – he has never won via ko/tko) and he is ranked as the No.9 featherweight in the world (currently the #1 in this division is Max Holloway) but he comes off the loss against Jose Aldo (Jose Aldo vs Renato Moicano Carneiro); before this bout, in 2018, he had beat Calvin Kattar in April (Renato Moicano Carneiro vs Calvin Kattar) and Cub Swanson in August (Cub Swanson vs Renato Carneiro).
His opponent, Chan Sung Jung, has a mma record of 14-5-0 (86% finishing rate) and he entered as the No.63 in the same weight class. ‘The Korean Zombie’ had also lost to Jose Aldo, in 2013 (Jose Aldo vs Chan Sung Jung) but since then he has fought just twice defeating Dennis Bermudez (Dennis Bermudez vs Chan Sung Jung) and losing to Yair Rodriguez (Chan Sung Jung vs Yair Rodriguez). Moicano vs Korean Zombie is the main event of UFC Fight Night 154 – UFC on ESPN+ 12. Watch the video and rate this fight!