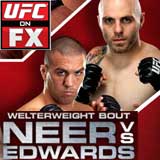 Review: 2012-10-05, great and fast submission (UFC Submission of the Night): Josh Neer vs Justin Edwards gets three stars. Josh Neer ranked as the No.46 welterweight in the world, entered the fight with a record of 33-11-1 while Justin Edwards had a record of 7-2-0. Neer vs Edwards is on the undercard of Travis Browne vs Antonio ‘Bigfoot’ Silva (UFC on FX 5). Watch the video!